Moldova, one of the smallest and poorest countries in Europe, has become one of the main destinations for the Ukrainian refugees forced to leave their homes. Thousands of refugees found safe shelter in neighbouring Moldova immediately after Russia launched military attacks against Ukraine on 24 February. The country has received and provided aid to each and every refugee despite the fact that its capacity is very much overwhelmed by the needs of the unprecedented refugee flow.

The worlds of millions of Ukrainians have fallen instantly apart with many being involved in a war they did not expect while others have been forced to leave their homes behind. More than 2 million people have fled Ukraine since the Russian invasion, according to the latest data provided by the UNHCR. Moldova has welcomed over 250,000 of these refugees, Moldovan President Maia Sandu said on 6 March during a visit by U.S. Secretary of State, Antony Blinken. Data analyses reveal that Moldova, whose population is 2.5 million, has by far the highest concentration of refugees per capita, with more than 4,000 per 100,000 inhabitants. 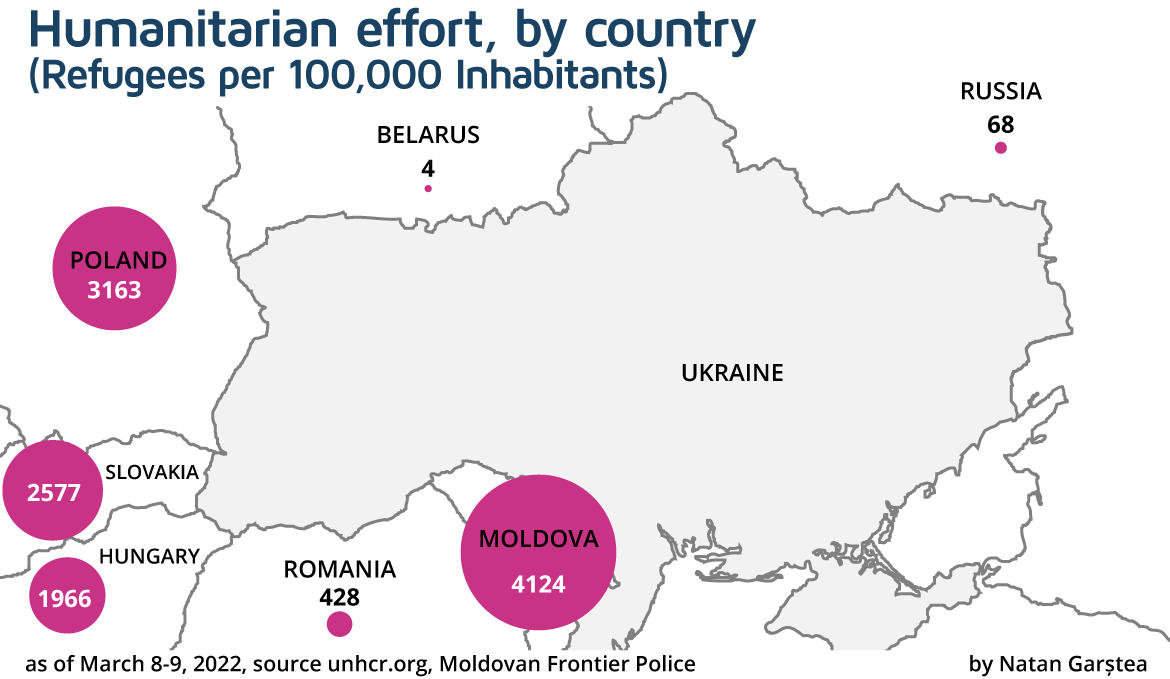 Source: Natan Garștea, economist, the Adviser to the Governor at National Bank of Moldova

The highest concentration of refugees per capita

Nevertheless, here in the Republic of Moldova, and in other European countries as well, the Ukrainians have found empathy, generosity, and the willingness to help. Across the country around 80 refugee centres have been organized where people are given accommodation, food, and essential items.

Many refugees came to the border with Moldova hoping to receive support within this neighboring country and that is exactly what has happened. Society has mobilized in an unprecedented manner with thousands of people volunteering to provide support for Ukrainian refugees, to drive them from the border to Chisinau or other places free of charge, to find shelter for them, to donate goods, to cook meals, etc. The local authorities have reoriented their resources to ease the flow of people. The Ukrainians have been welcomed on the Moldovan side of the border with heated tents and with food and blankets. In addition, free buses have been arranged to drive people to the refugee centers.

“I hope they won’t destroy my house. It is the place where I want to go back to”

More than half of the Ukrainian refugees who crossed the border then continued on their way to other European Union countries. Others chose to stay in Moldova, either in the refugees centers or to be hosted by Moldovan families or to rent apartments.

Tatyana Kovalchuk has fled her house in Odessa due to the escalation of the conflict, shooting, and bombing.

“People here are extraordinary. Honestly, I didn’t expect such treatment. Everyone comes to me and offers support or asks if I need anything, if I am okay if my dog needs something. I am glad I managed to leave, but I hope they won’t destroy my house. It is the place where I want to go back to,” says Tatiana.

The Ukrainians you will encounter in Moldova are praying for the war to end so that they can return home safely.

“When it comes to an end, we are ready to go back to our lives in Ukraine instantly,” says Bruhan the father of three children from Odessa.

Since the Russian aggression started, UN, U.S., and the European Union officials have visited Moldova to emphasize their support and assistance in managing the refugee crisis.

“Russia’s unprovoked, unwarranted war on Ukraine has kicked off a humanitarian crisis that is already having a vast effect across the region, including here in the Republic of Moldova”, visiting U.S. Secretary of State Antony Blinken said. “Our administration has requested of Congress US$2.75 billion in emergency assistance, humanitarian assistance, both to meet the needs of vulnerable people and communities inside Ukraine and also to help countries like Moldova to support the refugees and address the humanitarian crisis from outside Ukraine,” continued the official.

“Russia’s unprovoked, unwarranted war has kicked off a humanitarian crisis that is already having a vast effect across the region”

“Our border stays open to all those who have been forced to leave their homes, and although the number of people entering our country is very high, we are mobilizing to offer our full solidarity. Moldova’s friends around the world have seen, appreciated, and deeply respected our humanity,” said Nicu Popescu, Moldova’s Deputy Prime Minister, and Foreign and European Integration Minister.