While countries continue to struggle with the destructive effects of the pandemic on their economies, the war in Ukraine threatens to strike the world economy in multiple ways, jeopardizing food, energy, and financial markets. At the same time, a recent paper published by the Global Crisis Response Group on Food, Energy, and Finance warns that developing countries are expected to be particularly badly hit.

According to the UN’s Global Crisis Response Group on Food, Energy and Finance, Russia and Ukraine are vital producers for the global food market as they supply 30% of wheat and barley as well as providing one-fifth of global maize and meeting 50% of sunflower oil demand. As a result of the war, the production and export chains in these countries have been disrupted which, apart from affecting supplies, has also triggered an increase in prices. Moreover, the effect is also expected to be felt throughout 2023 as agricultural producers in many countries cannot access the inputs they need for further production.

Fig.1. Most exposed countries to wheat from Russian Federation and Ukraine 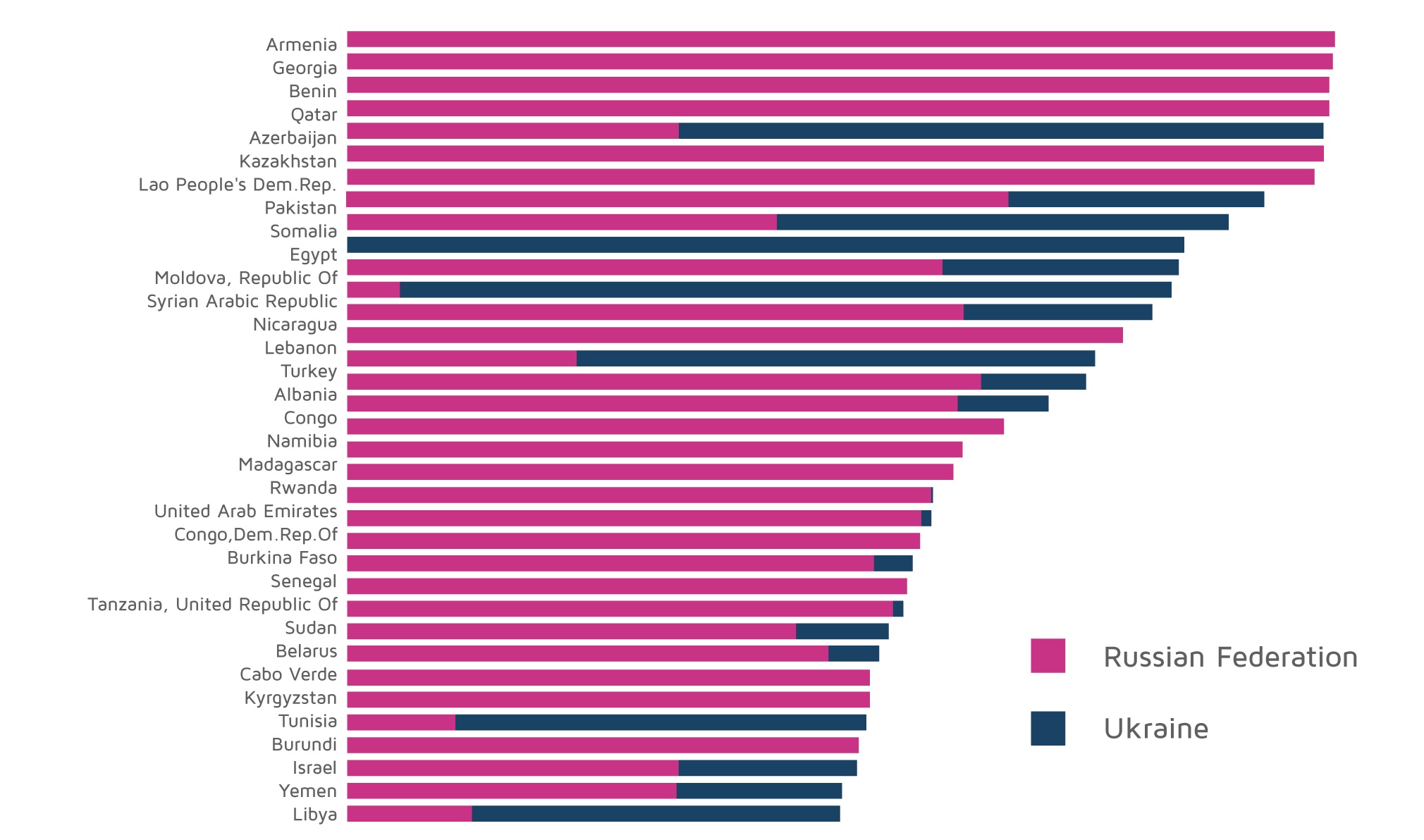 (Share of imports of wheat from Russian Federation and Ukraine as a percentage of total, 2020)

Source: Global Impact of war in Ukraine on food, energy and finance systems

At the same time, according to the World Bank, Ukraine alone exports 40% of global seed oil, 13.4% of corn, and 5.25% of wheat. Affected by the war, Ukraine’s exports are anticipated to fall dramatically, impacting food security and increasing hunger around the world.

According to the paper, Russia is also a leading natural gas exporter and the second-largest oil exporter. At the same time, Russia and Belarus together meet one-fifth of the global fertilizer demand. While the energy market was already constricted before the beginning of the war, as the conflict unleashed, the prices for gas and fertilizer hiked up more than double while the price of crude oil surged by over 60%. As a consequence, commodity prices have reached record levels.

According to the United Nations Food and Agriculture Organization, food prices in April 2022 are 34% higher compared to prices recorded one year ago. The organization states that prices have never before reached this level since records began.

Source: Global Impact of war in Ukraine on food, energy and finance systems

According to the Global Crisis Response Group on Food, Energy, and Finance, established to coordinate the international reaction to the impacts of the war in Ukraine, 107 countries around the world are vulnerable to at least one of the resulting effects which is rising energy prices, rising food prices, and tightening financial conditions.

Touching upon the impact of the war on food, energy, and finance systems, Secretary-General António Guterres mentioned:

“I want to highlight two overarching points made crystal clear in this report. First, the impact of the war is global and systemic. As many as 1.7 billion people — one-third of whom are already living in poverty — are now highly exposed to disruptions in food, energy, and finance systems that are triggering increases in poverty and hunger. The report also shows that there is a direct correlation between rising food prices and social and political instability. Our world cannot afford this. We need to act now. And that leads to the second point clearly demonstrated by this report: we can do something about this three-dimensional crisis. We have the capacity to cushion the blow.”