Hunger in Africa: statistics and facts

A staggering 281 million people are suffering from disastrous food shortages in Africa and the situation is expected to worsen for many more millions with the impact of the COVID-19 pandemic hitting the continent. According to an interactive digital report by the United Nations, the number of people suffering from hunger on the African continent is increasing and sadly, an enormous proportion of those who are undernourished are children.

Bearing this in mind, let’s take a closer look at the causes of and the facts about hunger in Africa.

Recurrent patterns of droughts and flooding silently affect disadvantaged people. Civil unrest, displacements, mass migration, and other sociopolitical and economic issues that are so frequent on the continent are causing the lives of Africans to be even more vulnerable.

The recurring monsoon season has led to the inability of local farmers to sustain their livelihoods. In the eastern and southern parts of the continent (Malawi, Mozambique, Zimbabwe), people have been greatly affected by storms, floods, and swarms of desert locusts.

Based on the Global Hunger Index developed by the European NGOs, Concern Worldwide, and Welthungerhilfe (a German non-profit and non-governmental aid agency), hunger has reached crisis proportions in five African nations: the Central African Republic, Chad, the Democratic Republic of the Congo, Madagascar, and Yemen.

There is insufficient data to accurately estimate the current status of other nations but the situation in four countries – Burundi, Comoros, South Sudan, and Syria – has been provisionally classified as “worrying”.

The Global Hunger Index (GHI) is an instrument that monitors and records hunger internationally as well as by area and nation. The estimates are carried out annually with the findings published in a special report.

The Global Hunger Index uses a 100-point scale to rank countries according to the level of hunger – nations with the highest score suffer the most. 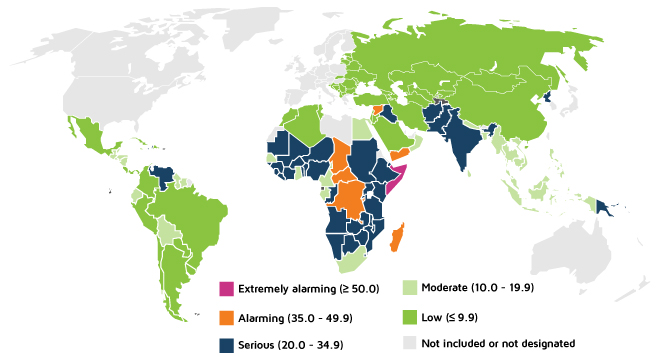 Over 61 million children in Africa were stunted as a result of chronic malnutrition in 2021. This is an enormous number which represents 15% of all the children currently living on the continent. Moreover, these children face issues with school attendance and as a result, their nations lose important talent and a skilled workforce thus continuing the cycle of poverty and misery.

According to UNICEF, hunger affects children from impoverished and rural homes the most. Moreover, undernutrition is twice as common in children living in rural areas. The UN agency also notes that:

Statistics of starvation in Africa

Take a moment to think about this: according to a report from the FAO, 281.6 million Africans were undernourished in 2020 which exceeds the figure in 2014 by 89.1 million. 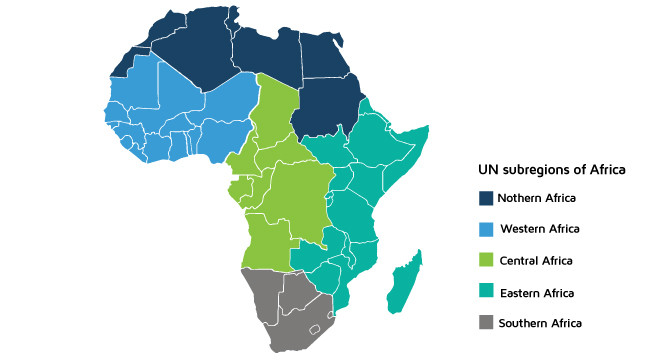 In 2020, an astounding number of over 100 million African people became victims of disastrous levels of food insecurity. Wars are still the principal cause of Africa’s severe food insecurity. 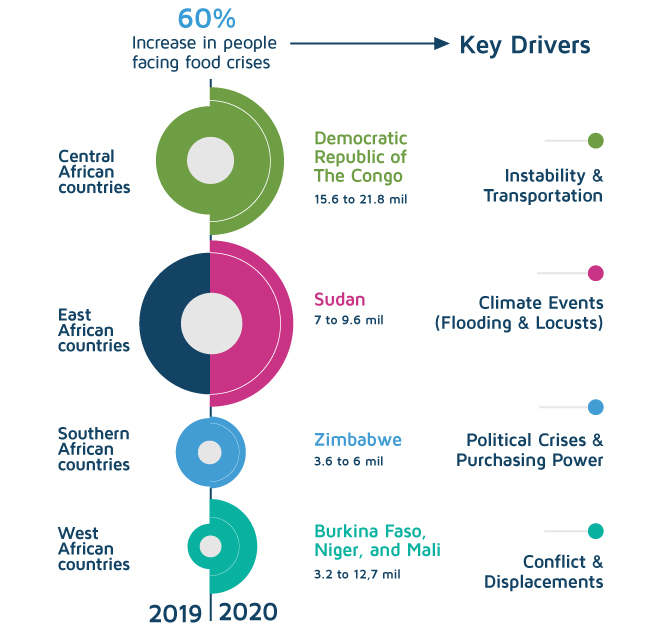 COVID-19 has exacerbated food insecurity throughout the continent with access to food being hampered by border closures, lockdowns, and job losses. Due to extended transit periods, sellers of food and animals have experienced an increase in damaged goods.

Eight African countries on the edge of famine

The Democratic Republic of the Congo

According to data provided by the FAO, the DRC faces the world’s most severe food crisis. Overall, 41.7% of people from nearly 90 million face extreme hunger. According to the conclusions of the nation’s first malnutrition study (November 2021), 857,000 children aged five and younger along with 468,000 pregnant or lactating women were predicted to struggle with acute malnutrition in 2022.

In the period between September and December, 2020 around 9.34 million people experienced severe food insecurity in this country. The issue is mainly the result of the COVID-19 epidemic and preventative strategies as well as rising food prices, drought, and economic deterioration.

In 2020, the nation suffered the worst flooding in the last century together with the biggest locust infestation in years which led to extreme food insecurity that affected 3.5 million people.

Very few farmers have the ability to continue harvesting crops in South Sudan. This is because most people have abandoned their homes due to violence which, in turn, has led to a drop in production and an increase in food prices.

Furthermore, during heavy rains, it is almost impossible to drive around the country where some 60% of roads become flooded. This limits the transit of food aid as well as items being delivered to the market.

Around 2.9 million people in the country’s rural regions (approximately 27% of the rural population) still suffer from food insecurity throughout the peak lean season (from January to March). Due to a lack of efficient political management, Zimbabwe suffers from alarming food insecurity levels leaving nearly 6 million people requiring food assistance and access to clean water and hygiene.

The Horn of Africa (Djibouti, Eritrea, Ethiopia, and Somalia)

Based on the data provided by the World Food Programme, around 13 million people from this region face extreme hunger. In the southern and south-eastern regions of Ethiopia and south-eastern and northern parts of Kenya, for instance, droughts have severely affected pastoral and agricultural populations.

The African population is mostly unprotected against extreme events such as natural calamities and conflicts. Indeed, it is beset by issues that jeopardize its capacity to provide food and nutrition security to its population and this scenario appears to be repeated year after year.

However, the continent has huge potential to develop – it is undoubtedly one of the most resource-rich regions on Earth. We can witness vast agricultural lands, tropical rainforests, and natural resources, and all of this on the continent that is known as the home of some of the driest deserts on the planet.

African governments need to establish an environment that would be of interest to foreign investors thus offering local people the ability to make a living. Despite its great potential, the conflicts in various African countries fail to ensure security for investors and this is an issue that must be considered both today and for the future.