Norway is the tenth largest donor country in the Organisation for Economic Co-operation and Development (OECD) and 2019 saw its largest ODA budget to date – US$4.6 billion. Norfund is one of Norway’s instruments for channeling its development assistance to developing countries, representing a share of a little more than 10% of total development aid. Its global investment portfolio currently stands at approximately. US$2.6 billion and 163 projects and, by the end of 2019, almost half of its portfolio had been invested in clean energy projects.

Established in 1997, Norfund’s strategy reflects the Norwegian government’s development assistance policy. As the institution’s CEO, Tellef Thorleifsson, explained, the organization’s mandate is to help companies to get started by contributing to the provision of “access to energy, banking services and other key infrastructure” which would help to establish viable enterprises. Norfund provides capital in the form of both equity and debt but the preferred instrument is equity investment which accounts for 67% of the total investments made. This instrument also enables the DFI to take an active role as a board member and have an influential role in a company’s governance. Being a minority investor is a principle that is defined in Norfund’s mandate and Norfund’s ownership will not normally exceed 35% of a company. 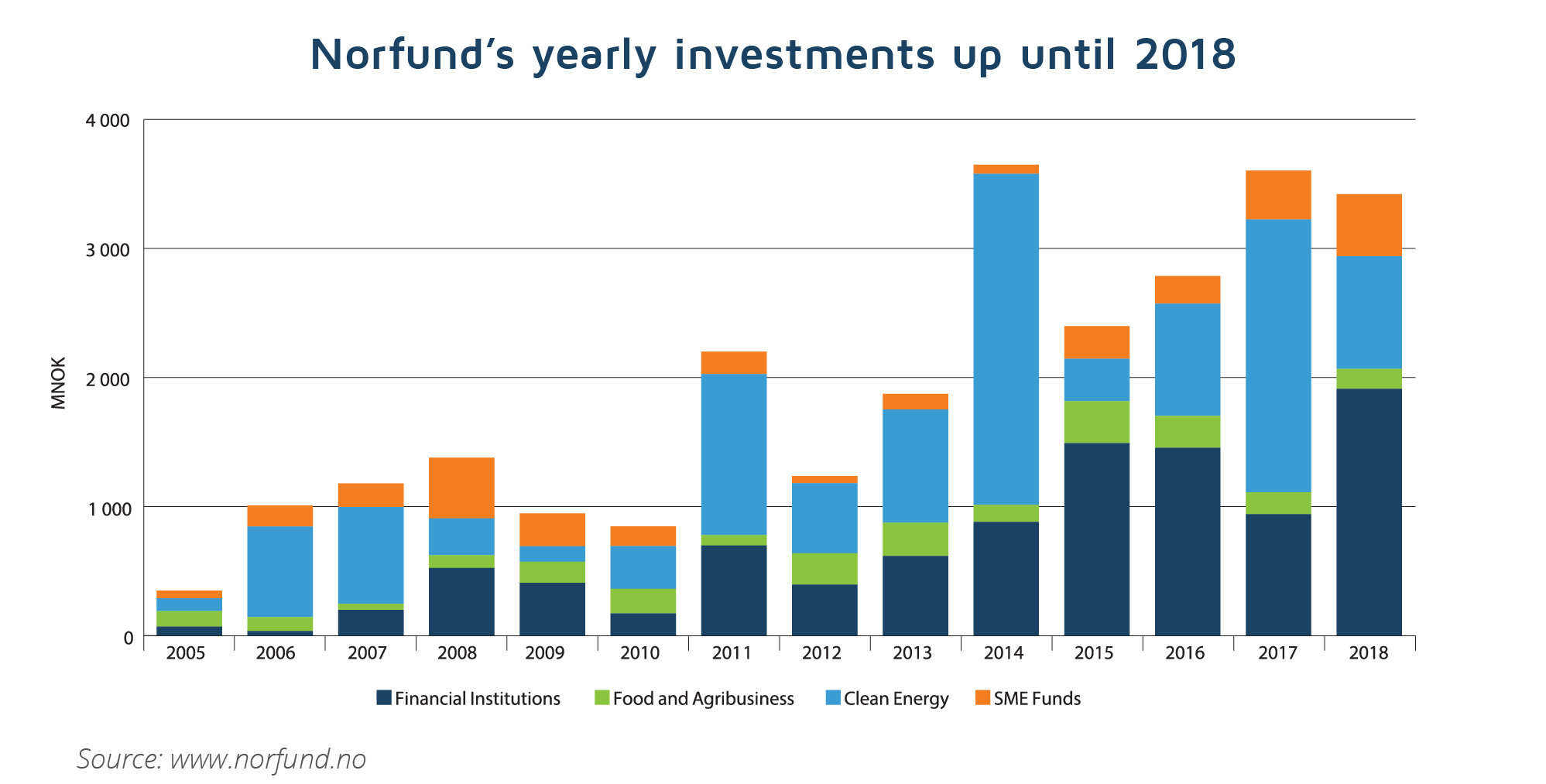 Norfund invests primarily in Least Developed Countries (LDCs) with the priority investment region being Sub-Saharan Africa which receives more than 50% of its investments. The fund also invests in selected countries in South-East Asia and Central America. Its main investment sectors are clean energy, financial institutions and food and agribusiness. Supporting the development of small and medium sized businesses (SMEs) through specialized funds is also a central part of the organization’s activities. Another type of investment in the portfolio is investment in new enterprises, so-called “greenfield investments”, which account for 35% of the total portfolio. In this case, the fund provides capital to new enterprises which are deemed to be risky and therefore generally attract less capital. Typically, Norfund exits its investments after five to ten years for equity investments, after five to seven years for debt holdings and after 10 to 12 years for fund investments.

Clean energy is the largest component of Norfund’s portfolio and, while hydro-power has dominated its’s energy portfolio, solar and wind power account for an increasing proportion of the investments. By the end of 2018, there were 30 operational power plants in Norfund’s portfolio that produced 17.4 TWh. One of the DFI’s biggest energy projects, the 310 MW Lake Turkana Wind Power plant in Kenya, is the largest wind project in Sub-Saharan Africa which contributes approximately 17% of installed capacity in Kenya. Since its inception, Norfund has invested more than US$12 billion in clean energy projects.

A central part of Norfund’s mandate is the concept of additionality which means that the fund offers value that goes beyond capital value, providing active ownership, promoting environmental and social standards and supporting enterprise improvement. Through both financial and value additionality, Norfund’s investments help to directly achieve several of the Sustainable Development Goals targets: SDG 7 (Affordable and clean energy), SDG 8 (Decent work and economic growth) and SDG 9 (Industry, innovation and infrastructure).

Norfund recently launched its three-year strategy for East Africa, the region which has been one of the fund’s focus over the past decade. Norfund will increasingly buy shareholdings and provide loans to local manufacturing and agribusiness firms as well as directing its investments towards green infrastructure, including waste management and access to clean water. This diversification of the portfolio comes after Norfund wrote off its investment in Kenya’s failed Kinangop Wind Park project which was cancelled in 2016 after protests from local communities. The fund intends to make up to ten new investments in local businesses dealing with solid and liquid waste management, clean water, electricity transmission lines and power storage.

Subscribe to our News Digest to receive information about existing Development Finance Institutions (DFIs). You can read here the previous article from our “DFI files” series, about the Swiss Investment Fund for Developing Countries. Stay tuned to our next DFI from the series, Denmark’s Investment Fund.